A quick, non-traditional, note of thanksgiving 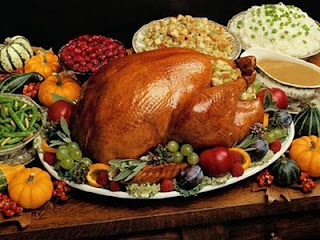 My wife comes from a huge family – this Thursday there will be 30 people in various states of consciousness standing around staring at the oven waiting for the female-in-laws to pull the turkey(s).

I grew up as the only kid in the house, so I get a kick out of hanging out with a gang of revelers on holidays. One of the best parts of the day is going around the table asking what everyone is thankful for this year – we get a lot of the usual; family members, school, friends, the dog, passing grades.

This year I am going to offer thanks for something a little non-traditional.


I am going to be thankful for the results of my labors. Yup. My labors.

Talk about politically incorrect! OMG – I am going to create a scandal. Half my in-laws are left of Che’ and Fidel combined. One beloved brother-in-law insists he votes for democrats so they WILL raise taxes. Hey, I’m working on them, but it may take a few more 2011 type elections before the pigeons come home to roost.

Oh boy, can I hear them talking about me behind my back Thursday afternoon!

“What unmitigated gall! How dare he thank himself! He owes thanks to God, and America, and, and…and…well, I never...”

“I know…it’s SO selfish…and on Thanksgiving!!! He should be thinking of others!”

Pammy is going to absolutely kill me – she hates controversy - poor thing married to me, hunh?

That turkey did not get there because of God, America, or the Democrat Party. Sure, the big guy had a hand in it; he put turkeys on the face of the earth in the first place, presumably so we could eat them. But, he isn’t going to reach down from heaven on Thursday, chop Tom’s head off, and stuff him in my oven.

Maybe America will someday hand out salt-free, transfat-free, peanut-free, non-denominational, carbon-neutral, children’s toy free, tofurkeys to every man, woman, and child – I guess that was sorta supposed to be the point of the hopey/changy thing that hasn’t seemed to work out too well – but so far this week nobody from Beacon Hill or Washington has offered us anything for free, especially not a nice, big, fat, brown, juicy, Pepperidge Farm stuffed, Butterball.

No folks, the turkey is on the table this year because I worked my butt off, created wealth, produced, innovated, and received a reward for doing it.

We can, and believe me I do every day, thank God for giving us the opportunity to produce. For me personally that means, I thank Him for giving me the brains to create ideas, the hands and voice to convey them, the feet to get me places to convey from, and a great employer who seems to value them. I also thank Him every day for giving me my health and the initiative – the will – to produce, to compete, and to win.

Our ancestors – well mine anyway – created that first Thanksgiving by working their tails off. They cut down trees and ripped up tree stumps to make fields. They sowed, tended, and harvested. They fished. They hunted. They milled and baked and fried and roasted. They brewed! Then, when the storehouses were stocked and beer was lukewarm, they invited the neighbors over and kicked it old school for three damn days. Go Papa Alden! You rock(ed)!

Yeah, I know they prayed themselves silly doing it, and maybe both Grampy John and Grammy Priscilla are rolling in their graves down in Duxbury right now as I write this, but to my mind this holiday is about the producers, the workers, the contributors, the ones who build, make, create, and add value to the world. They are the people who make this country great. Always have.

Let the collectivists, apologists, and takers have some other holiday. Thanksgiving is for celebrating the results of hard work and enjoying the rewards of its reaping.