Maggie doesn't know about Jesus being God or about tomorrow being his birthday.

She thinks we're nuts for dragging a tree in the house, and she doesn't get the point of hanging lights outside.

She sees fine in the dark.

If Jesus came by the house tomorrow, she'd bite his butt. She does that. She's bitten the drum teacher, most of Lily's friends, a few of David's, my sister-in-law, brother-in-law, the Zoots guy, and probably a few dozen others.

So I'm pretty sure if a bearded guy, with long hair, and a robe came to the door, she'd take a little chomp of His butt, too.

She can't help it.

and thighs, and the occasional ankle.


And it's not like she doesn't know better...she's been bitten a few times herself...by coyotes, the dog next door, a friend's dog at a field hockey game...she's literally covered in scars from nose to tail.

I suppose she has a right to be cranky. After all, she lives with just about every known health issue a Shar-pei can get - allergies, tiny ear canals that get infected, eye lids that roll under and scratch her corneas, skin infections, Shar-pei fever, kidney failure, and now incontinence.

She also smells. Omg, she reeks! And leaks, and barks, and frankly, she is a major league pain in the ass.

She doesn't play - ok, she'll fetch her rag doll a couple times if she's in the mood before plopping back down to sleep, but that's it. 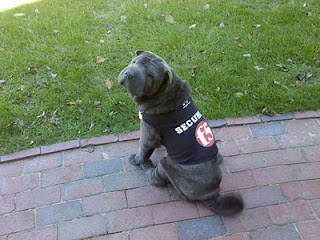 Come to think of it, she really doesn't do much of anything. She eats, drinks, poops, pees, bites butts, and guards her territory.

Wow...does she ever guard her territory. You don't want to be a squirrel, or a cat, or a UPS truck driver in our neighborhood.

Did I mention she bites?

So a lot of people told us we should put her down - our family, neighbors, insurance agent...they all said she's not adding anything to the family, so get rid of her. Why would you keep her?

There were some times we asked ourselves the same question...we used to joke about taking her on that long one-way trip to the vet. Especially after she bit, or leaked, or puked, or scared someone half to death.

We know the way to the vet with our eyes closed.  In addition to bites, she's had a bunch of skin tags removed. Another bump, another trip to Angell Memorial, another operation - thank goodness for pet health insurance.

We're so used to it, we didn't think a thing about having another one removed last month.

Until they called and said it was a mast cell tumor, stage 3, Incurable. A few weeks...maybe.

I haven't seem my son cry so hard in his entire life.

The odd thing is she seems totally fine, just great - happy-to-see-us waggy-tailed every morning, jumping-around-the-kitchen excited for supper, spinning-in-circles pysched when the postman throws her a cookie, four-feet-in-the-air wiggly for belly rubs. If anything, she's in a better mood than ever.

It's like she's trying to make up for all her years of petly suck-a-tude.

She hasn't even bit anyone since they started the chemo, but just to be sure we'll lock her in her crate tonight so she doesn't snag a toothful of Santa's butt when he slides down the chimney.

As for Jesus, if he does decide to stop by the house for his b-day party tomorrow, I hope she doesn't scare him away.

Today they found another tumor...we don't have much time left with her...so it would be awesome if he could lay hands on her and fix it so she wouldn't smell quite so bad...
at 4:30 PM

Kirby enjoy Maggie's last Christmas as best you can. As a fat guy with a beard I can tell you as a fact that Santa won't mind a little nip. Extra padding, and a little magic you know.

As a fellow dog lover who's had to replace his best friend I can only quote:

"I have sometimes thought of the final cause of dogs having such short lives and I am quite satisfied it is in compassion to the human race; for if we suffer so much in losing a dog after an acquaintance of ten or twelve years, what would it be if they were to live double that time?"

(Sir Walter Scott)
"If you have a dog, you will most likely outlive it; to get a dog is to open yourself to profound joy and, prospectively, to equally profound sadness."

"If I have any beliefs about immortality it is that certain dogs I know will go to heaven, and very very few people."

oh boy. I had two shar pi- one lived to 16; one died at 6 1/2... I still miss them, but I am happy to have a healthier dog now... it is sooooo sad when your dog leaves... it really is. Be stong and get a new dog. It will feel all wrong for awhile. You will call the new dog the old dog's name. You will hate that it's personality is different... but it is the only remedy.

She's likely guarding the pearly gates by now, helping St. Peter chase away sinners. Which is unfortunate for the souls of Fedex drivers...

She is sorely missed

It is amazing to non pet owners why we seem to be so enamoured by our animals. You can see such peopel roll their eyes, look bored or plain escape as soon as possible. But for pet lovers, the companionship these animals give is something that cannot really be explained. I am not quite sure what it is, the innocence, the unconditional love or the knowledge that you are responsible for them, like a child. I know you will miss Maggie when she goes but you will never forget her.

Its been 9 months since Maggie died. We have her ashes in a box up on a shelf overlooking the front door that she so ferociously guarded for 6 years. You can still here the echoes of her growling and barking every time the UPS truck drives by...but its finally time to fill the void. We get our new pup, Mumford, in a couple of weeks. This time we went for low maintenance and zero aggression - he's a goldendoodle. Can't wait.