Adam Ezra - Get out of my head! 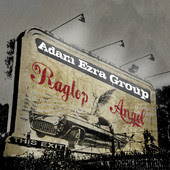 I just asked Pandora to set up an Adam Ezra Group station – the first song it played was by Rob Thomas, which made me smile in an ironic sort of way. I guess it works – similar vocal textures – but if Thomas is a star, and that fact is hard to argue -- then Ezra should have his own private constellation.

Don't you feel that sunshine?
Telling you to hold tight
Things will be alright,
try to find a better life

Ezra may be the most talented singer-songwriter to come along in decades. You will download Ragtop Angel.  You will listen to track #4, Takin’ Off.  You will do it now.

Seriously, not since Greetings from Asbury Park, have I been this in love with a new talent and a new album.

We caught Ezra opening for another of my favorite singer-songwriters, Edwin McCain last fall at Showcase Live in Foxboro. I have been a huge Edwin fan since way before the schmaltzy wedding songs. I discovered him playing for free in 1995 at Northwestern University. He looked about 20 years old, belting out original tunes with a voice box that sounded like the alien love child of Billy Joel and Joe Cocker. Forget the “I’ll Be” crap, and download his first album, Honor Among Thieves. Listen to Jesters, Dreamers, and Thieves to get a sense for this guy’s early talent.

Edwin, like me has a few more years, and looking in Tyler’s proverbial mirror, a few more lines on his face, now. He can still sing, and his band rocks the socks off a place, but that night last fall, Edwin was sick as a dog, and The Adam Ezra Group burned up the stage before poor McCain and his 101 degree fever ever got a chance.

Ezra’s a little cracked – barefoot, waist-length dreads, lots of flannel. He’d get lost quick in a Occupy Anyplace crowd. Ok, maybe you don’t want him showing up at the door to date your daughter, but good gawd, this guy can play. He’s warm, funny, frenetic, and fun to watch. More impressive is the talent that oozes – literally and figuratively – from every pore once Adam gets wound up. The expression in his voice is exhilarating and heartbreaking all at once. The fingerpicking is odd, syncopated, and well…just odd, but it works. Ezra says he keeps glue-on fingernails on his right hand. As I said, odd.

I first heard about him from my kids – of course. He grew up in Wayland, and went to our high school. Every winter, the school admins bring him back to talk to the kids, and put on a little a show at the school. All my kids are fascinated by the fact that he’s from their town and school – but that doesn’t mean much to me. Sammy Adams – the white hip-hopper who stormed iTunes a couple of years ago – also graduated from Wayland High with one of my sons.

No, the reason I have listened to Ezra’s new album non-stop for two weeks – have not listened to another note of music since Lily brought it home from school – is simple. I can’t stop. It’s like an itch, some weird hunger. I dunno, maybe this is how alcoholics and drug-addicts feel. I hear it in my head when I am not listening, so I listen to make the itch go away, but that just makes the itch worse, and whole cycle starts again. 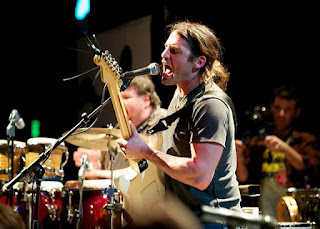 Honestly, I am beginning to hate the bastard. Dammit all, now I have to go listen to it again.

Ya, it really is that good.  Remember the first time you heard Blinded by the Light?  4th of July? Rosalita? That voice, the sax? It’s like that, but different, maybe better, because its 100% totally authentic. There’s no posture, no pretense, no attempt at stardom. Ezra plays for the same reason I can’t stop listening, and you won't either – he just can’t help it. If he tried to quit, his head would explode. He plays because he has no choice. The music pours out of him.

Listening in the car, you’ll be lucky not to hit something. Your fingers will dashboard drum, your feet will tap the brake and gas, you’ll be singing out loud at traffic lights, and your neighbors will look at you funny. He’s odd, they’ll say.

But you’ll sing out anyway, until your voice cracks, and your eyes tear up.

Because he is that good.

Don’t say I didn’t warn you.