Dishonest and Rude is No Way to Go Through Life, Son 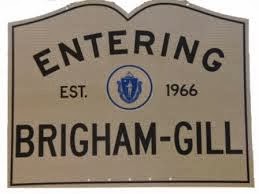 My mom used to play bridge with a nice lady named Peggy Brigham. Every couple of weeks, I got the call to drag up the card tables from the basement and help mom set up the living room.  I still remember the chocolate covered nuts mom would put on the table. A living room full of bridge playing AAUW members was a loud room, but I remember Peggy was really bubbly and really loud. She was also a bit of a celebrity because her husband owned Brigham and Gill Motors out on Rte 9, where everyone bought their cars.  I remember also that she lived up on Livingston Road - in one of the BIG houses in town.


Like my mom, I'm sure Peggy is long gone, but Brigham and Gill still exists.  And I went there yesterday to try and buy a car.  The taste they left in my mouth...well, it was anything but chocolate covered.

I talked to a seeming decent guy named Ali. He refused to budge off his "non-negotiable" Internet-only price (which wasn't actually unfair), but as a concession, he did offer to give us a set of rubber floor mats, after a 20 minute fake argument in the back room with his sales manager.  Wow - we were lucky to have such a tiger on our side in the negotiation!

Don't you just HATE the car buying process?  Wait it gets worse.

When I balked, he became visibly angry, and then he began spinning a web of lies. The glass etching fee wasn't actually a glass etching fee - it was part of the 'non-negotiable' documentation fee.  (Red flags flying)

When I asked what the doc fee was for, he mumbled some crap that it was for the registration process, and was required by law. When I called BS on that he got really heated, stating that the dealer would be open to a class-action lawsuit if they did not charge everyone the same fee. (Warning lights flashing).

Then he stated that I absolutely would have paid this fee for every car I ever bought in Massachusetts. (So he's calling me a liar now?)

Note that NONE of those statements is even remotely true.

See this consumer warning from the Massachusetts Office of Consumer Protection:  http://www.mass.gov/ocabr/press-releases/20120217-carbuyers.html

Turns out the State called 300 dealers and asked them about the "non-negotiable" documentation fee.  For a good laugh - read the lies other car salesman told the state investigators here: http://www.mass.gov/ocabr/docs/doc-fees-survey-2011.xls

If that wasn't bad enough - when I called Ali on his BS and asked for my deposit back, he literally balled the contract up, and said, "I'm through with you!"  He stomped away, left me standing in the middle of the dealership (with Pam virtually in tears she was so mortified that I would 'buck' the guy). Ali returned five minutes later with my refund in hand and practically threw it at me.  (and of course Pam yelled at me all the way home for not just paying the stupid $400, but that's a story for another blog...)

Keep in mind - I had agreed to pay FULL ASKING PRICE for the car.

Just inexcusable behavior - both in committing consumer fraud by lying to me, and doing it in an insulting and pejorative manner.  Pretty amazing really.

I reached out to Richard Gill on Linkedin.  Have not heard back.  I hope Peggy's ghost pays him a call - and very loudly reminds him of the importance of trust, credibility, and consistency in doing business today - where all business is about relationships and all business is online..

Even car dealers will benefit from reading Recommend This!
at 10:52 AM