A dear friend of my daughter made a few youthful decisions – some stupid and some not – that eventually resulted in the births of two beautiful baby girls before she graduated high school.

Lily’s friend and her baby’s father faced a variety of demons – some of their own making and some not – but eventually found a path to faith, marriage, and an honest effort to take their lives in a better direction.

My daughter stood by her friends as these fateful winds blasted about them. She worked part-time jobs through college to buy the baby girls clothes and gifts at birthdays and Christmas. She stayed overnight with them to give her friends time alone. She taught the girls, played with them, scolded them, but mostly loved them deeply.

When her friends decided a change of latitude was required to escape the demons, Lily helped them pack up their clothes and toys, and crushed them with hugs and kisses before waving them on their way to a new life in Florida.

At first, the peace was enticing. Without the distractions, Lily focused on herself – getting into the best shape of her life, and earning top grades – but under the surface, the emptiness was almost more than she could bear. She stayed in touch, of course, but instant messages and video chats don't fill holes in your heart.

Let me tell you, watching your kid in that kind of pain, and being helpless to do anything about it...

As we knew it would, the dam burst a couple of weeks ago when the older of the two baby girls mentioned DisneyWorld on a Facetime call,

“The princesses are so beautiful, Big Lily. We want to meet them so bad! But, Daddy doesn’t have enough money to take us right now. It’s hard, but we have to wait until he saves up to take us.”

Well, let me tell you, I don’t have 3 million frequent flier miles, and 1 million Marriott points, sitting in the bank for my health. And, I’m not taking them to the damn grave with me.

Lily was on a plane headed south in days. My son Jeffrey – the wizard of hotel upgrades – worked his magic to conjure a suite for them at the Dolphin. And I suspect his mom may have slipped a few sheckles in her purse. 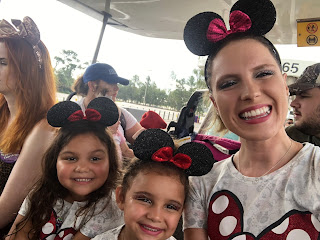 And here they are, on their way to see the princesses, fairy godmothers, and singing bears.

Think you will agree, those smiles are worth 10 million miles.

And lest you think I am a complete softy, Lily split the admission with her friends who did, in fact, save up. God bless them both, and keep them headed on the right path.

It’s anyone’s guess who paid for the overpriced t-shirts and mouse-ears.

My kids are freaking awesome...

Your kids sound awesome!
I'm not a stalker I just wondered if you lived on Northgate rd in Wellesley as a kid.
Dare I say, Kirby Wadsworth is not a super common name?
But I'm not sure any way if you did my sister and i lived across the street when we were all children